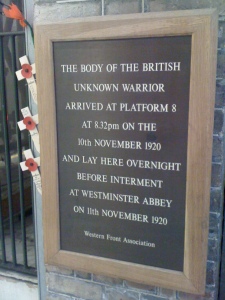 A-level meetings! Excitement and intellectual thrills. Further to my post on the 10th about the journey of the Unknown Warrior to his tomb in Westminster Abbey, it so happened that I wandered through London Victoria train station last week.

There, next to Platform 8, I found the plaque erected by the Western Front Association, commemorating the arrival of the Unknown Soldier’s carriage. Further along the railings, poppy wreaths had been lain by a number of different associations- from Tube and Train Drivers Unions, various army regiments, the British Legion, and even a Jewish servicemen’s organisation.

It was interesting to see the buffers that met the end of that famous journey. The Western Front Association has an interesting site with articles about the recent remembrance ceremonies, the Battle of Loos, Churchill, instructions in how deal with gas attacks, amongst others. It also has an article on the Victoria ceremony this year, here.

for A-level students and readers of World War One poetry and prose. Read detailed notes on A-level texts and join the discussion. Take a look at my ‘Ask Mr. Griffiths’ and ‘Welcome’ pages to find out more about this blog.

To find a list of all posts, check out the Archive at the top of the page.

I began this website in 2010 to support students in their A-Level studies at a school in Wandsworth, London.

Before the recent centenary  internet resources for young students of Great War literature were scarce. From the beginning this blog has provided free revision materials to students, found links to interesting resources, and sought to encourage a wide-ranging exploration of the literature of the First World War.

To date I’ve had over one and a half million visits from curious readers around the world. Welcome!

Are you studying towards your A-level exams and need some help?

I am an A-level teacher of 13 years experience with a track record of helping students of all abilities progress in their studies.

If you require a tutor who is familiar with your course and who can help you to improve your coursework and prepare you for your exams, then email me. We’ll set up a web meeting to discuss your needs and plan out a way forward for you in your studies.

I look forward to hearing from you!

Move Him Into The Sun

This blog has hosted